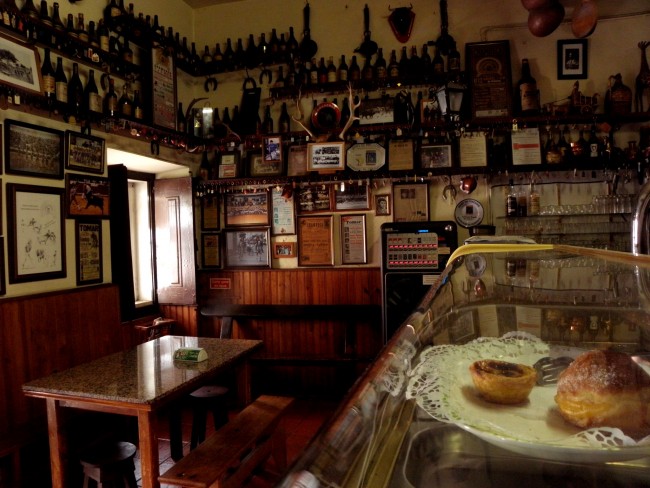 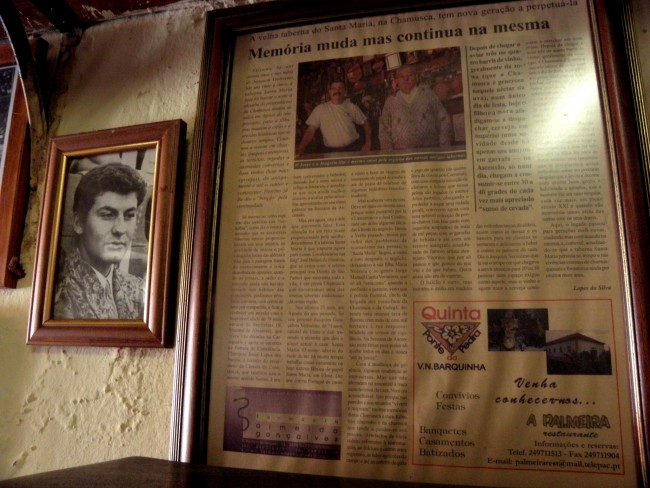 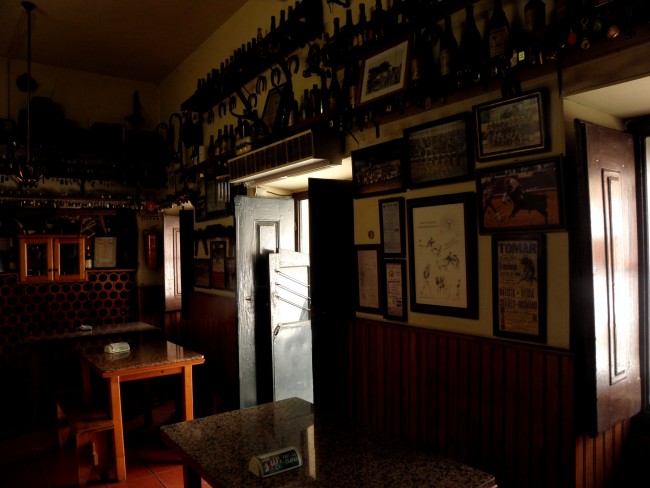 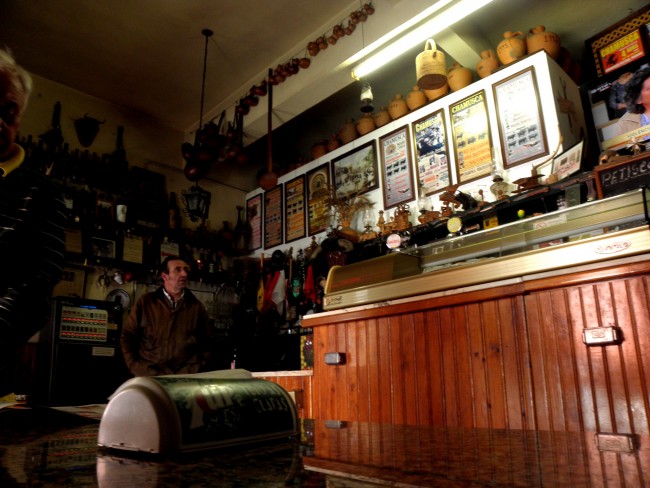 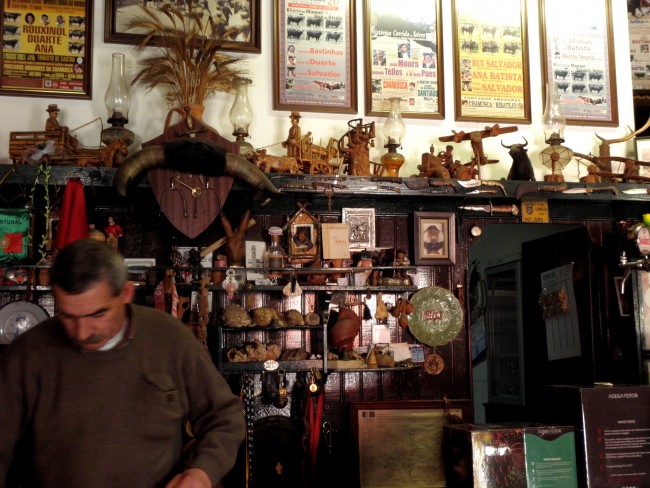 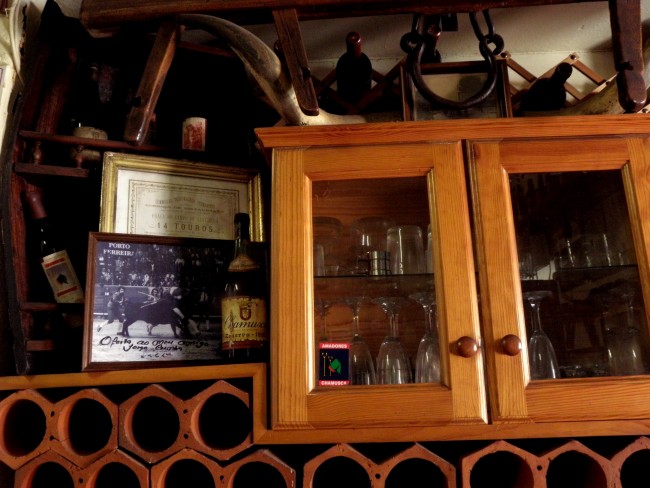 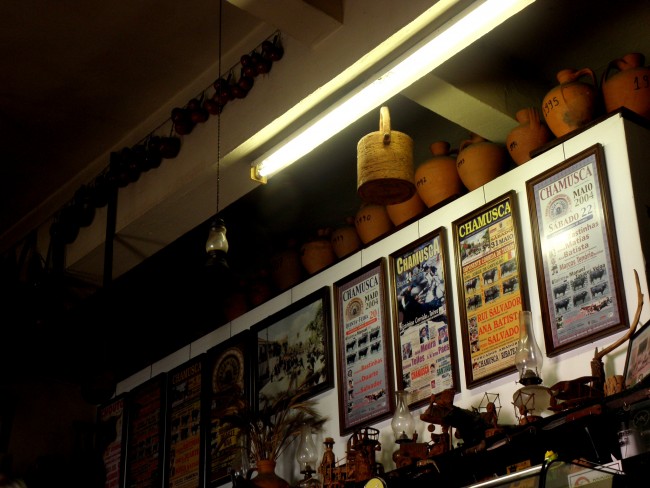 The Santa Maria tavern , Chamusca is a bar of no pretense, no tourist wanders inside, no camera crews or Michelin guides are aware of its existence. Much like the small town of Chamusca where it is situated. We wouldn’t have known of its existence had we not passed through Chamusca many times noting some of its amazing architecture which amongst the decay of a forgotten town stands so strong and is still so appealing.

This small town on the shores of the Tagus river has at least 8 historical churches that we managed to count, some impressive manor houses and its locally famous for its bullfights.

The landscape of Chamusca is that of the Tagus valley is flat like the Netherlands with the town of Chamusca build on its hilly borders to avoid flooding in the winter months. The flat lands, close to the river, are the most fertile, already hosting the first west Iberian vines 2000 BC and the lands of the first vines to be planted in what would, at a later date, become Portugal.

Dark, old and abandoned wine fermentation tanks, very Portuguese in shape stand next to the decayed and neglected wine cooperative from its once much loved Chamusca wine brand. The town and surroundings have many orange orchids and it has one of the loveliest restaurants in the district called  Poizo do Besouro.

Lots of noticeable reminders that it was once a very prosperous town until for some reason, time stood still, other than the busy N118 which cuts right through its narrow center, you wont see much activity  just quiet people going about their daily activity so used to their surroundings that asking them anything about these surroundings makes them react as if they are seeing it for the first time.

Only some of the older people can react passionately and surprised at the unexpected interest sending them into a frenzy of stories and detail that often end with a sad relay on how nobody cares about their past.

The first time we visited the Santa Maria was in need of a coffee, outside it didn’t look like anything other than a quick coffee so the surprise was big once we got inside  this little museum of past glory.

It is really a little tavern, the way they are supposed to be, documenting much of Chamusca`s past from the bull fights to the wines , newspaper cuttings framed on the walls, dusty bottles of Chamusca best wines stand in forgotten glory, old bottles of aged greats lie in the wine racks and memorabilia of all kinds hang, sit and stand wherever there is space. No interior designer,  master chef or innovation business manager walked in here to redo its ambiance to fit better our modern expectations though many will try to copy what is simply wonderful in such a unique place.

The tavern is from 1930 and like  most of Chamusca its a place where time managed to stop, stand still and inspire much of what we find trendy and consider beautiful today! 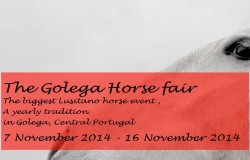 The Golega Horse fair 2015 coming up again in November! 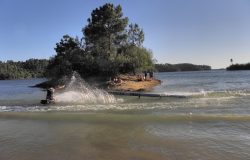 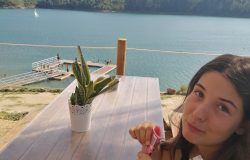 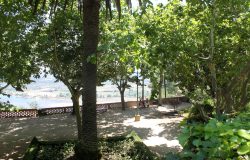 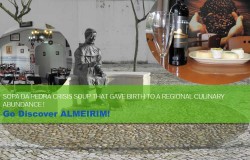 Self catering bungalows, Castelo do Bode / Aldeia do Mato