BEAUTY AND MYSTERIES OF THE COLARES VALLEY
Extension: 5 kms. 2h30/3hrs. Starting at 9.30
Our tour starts at Banzão, Colares, in front of the Colares Regional Winery.
The village and riverside, the place and Quinta do Vinagre (Vinegar’s Farm), and the jet-set festivities that took place here and became famous.
The legends and myths that fill this place. The castle that existed, the Nordic princess on the run, the giants here defeated.
The ‘Rio das Maçãs’ (Apples river) and vineyards on sand floor. The Vikings, and still the story of a Hungarian emperor who has been walking here.
In details:
A pedestrian route that will pass through the most beautiful and emblematic points of the zone.
Start by visiting the mythical Ribeira de Colares area – former Rio das Maçãs – to pass later at Quinta do Vinagre …
This superb Quinta do Vinagre was the site of the great society parties of the 60s and 70s on Portuguese soil.
Events that made history and relied on the superstardom of the international jet-set, such as Princess Irene of the Netherlands, Henry Ford, Aga Khan, Zsa Zsa Gabor, Audrey Hepburn, Valentino and many others who danced in Colares until dawn to the sound of Mills Hayden’s orchestra.
We can not fail to speak in history, in other ‘stories’, myths and legends here of Colares, of the castle that existed here, of the epic struggles here, that took place on this ground, against giant hideous people who terrified the people of the area, like one Morbanfo . Here Clarimundo, the Hungarian emperor from whom the Portuguese kings descend – according to a chronicle, defeated Morbanfo! Groaned later in chains, the giant was then trapped and dragged by ‘collires’ / collars.
Or Colares, the name, comes perhaps from the gold necklaces of the escaped Nordic princess and who built a castle here, pledging the jewels to the Moor Zelao?
This is also a territory where Sirgud, the Viking, passed through, this very same Apples River, now Ribeira de Colares.
And here Alcides (Heracles / Hercules) was beaten against another subhuman, the ‘Caco’ Pithodemos! This in a more remote era, in the days of Ulysses…
Colares is one of the oldest wine production districts in Portugal, going bac to the Roman empire. colares became most famous at the end of the 19th century when it vines proved to be immune to a new and very big threat to wine production arrived in Europe which was the introduction of the Phyllovera insect which the Colares grape managed to conquer thanks to its deep roots in the sandy Colares earth where the insekt could not reach.

Everywhere in Europe, except in this region, the use of the American plant (resistant to the insect) was adopted, grafted with European grape varieties making the Colares grape the only 100% European grape.

Amazing is to see the vines growing and producing their grapes in the sand!

After the walk with these stories being told, we visit the regional winery and taste 3 different regional wines, including the DOC Collares, from grapes planted on sandy soil.

Find other wine tasting activities in the area! 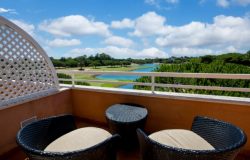 An introduction to Portuguese Wine